Home > The importance of Phosphorus for plants

The importance of Phosphorus for plants

Introduction
Lately, the confusion common in Europe, regarding the terminology used for products containing phosphorus, is expanding to the United States and other countries.

Plants absorb phosphorus only as the HPO4-2 ion or as the H2PO4-1 ion which are released in the soil a short while after the phosphate fertilizer is applied.

However, nowadays new names are coming in use, like PhosphorOUS acid (not PhosphORIC acid) and PhosphITE or PhosphONATE (not PhosphATE). The difference between PhosphoRIC acid, with 4 atoms of Oxygen (O) per molecule (H3PO4) and PhosphoROUS acid is that the later has no more than 3 atoms of O (H3PO3). 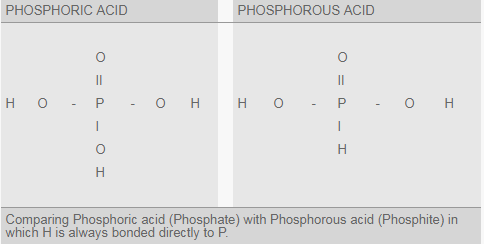 Is a difference of one atom of Oxygen so important?
There is a great difference between PhosphoRIC acid and PhosphoROUS acid: the first is a plant nutrient while the second one is a plant protection product (fungicide).

Is the argument, that each one can replace the other, misleading?
Do the phosphATES that plants require as nutrients have any effect on plant diseases? And, do the phosphITES, so efficient in protecting the plant from diseases, contribute to plant nutrition? It looks like things are not that simple.

So what it the problem when classifying phosphorus containing products as fertilizer or as plant protection compounds?

Plant protection manufacturers are under the obligation to register and license their products. To obtain them, they have to perform prolonged and costly field experiments under stringy norms, so as to be able to sell their products, including PhosphITES, on the market.

In contrast, the plant nutrients industry (fertilizer companies) declares and registers their products based on phosphITE as fertilizers, which they are able to register prompt and cheaply. At their correct dosage, such products have plant protection properties much above their contribution as fertilizers. The flyers and labels for such products describe them as “Bio-stimulants and fortifying ingredients” or even “plant protectors”, and not as plant nutrients only.

The list of products based on PhosphITE, on the American and European markets, labeled as nutrients, includes dozens of commercial names. The plant protection industry found out how to register products based on the alkali salts of PhosphorOUS acid as fertilizers.

How?
The European legislation requires that the concentration of Phosphorus (P) is declared in percentage units of P2O5 without mentioning the molecular formula of the product. Therefore, registering, according to prevailing legislation, a “fertilizer” containing PhosphITE instead of PhosphATE, as containing X% of P2O5 is perflectly legal.

The absurd and confusing side of the story is that some of the companies producing plant protection products make great efforts to register products based on PhosphITE as fertilizes in order to save registration expenses and reach the market earlier, while in the fertilizer industry they are investing much efforts and resources to register PhosphITE containing products as fungicides.

What is the logic behind that move?
The secret lies in the high profits earned by the plant protection industry. The fertilizer industry looks for the opportunity to enjoy “added value” profits. But most of them will be disappointed, since the market is highly competitive and prices are going down all the time.

Already 70 years ago research was going on about the efficiency of PosphITE as a fertilizer, but since the crops did not develop as expected, researchers concluded that PhosphITES are poor sources of plant available phosphorus, so that they did not reach the marketplace. Starting in the 90’s, the industry renewed its interest in PhosphITES as plant nutrients. But why did this happen?

Phosphite compared to Phosphate as a source of Phosphorus.
The PhosphITE molecule has one Oxygen (O) atom less than the PhosphATE molecule. Therefore their chemical properties and performance in the soil are different. The solubility of PhosphITE (in water) is higher than that of PhosphATE. Therefore its absorption by leaves and roots is more efficient, but may be toxic at too high a concentration. PhosphITE affect plant metabolism in a specific form. In due time, PhosphITE, after its application to the foliage or to the soil is converted into PhosphATE (Oxidized to its most stable form).

Foliar or soil applications are made at relatively low dosage in order to avoid affecting the nutrient balance. Nutrition with PhosphITE may give some crops special advantages that PhosphATES do not provide.

The concentration of phosphorus (P) in PhosphoROUS acid (H3PO3 with 39%P) and its salts (PhosphITE) is higher than PhosphATIC fertilizers based on PhosphoRIC acid (H3PO4 with 32%P).

Soil micro-organisms are able to absorb PhosphITE and release PhosphATE (benefiting from the energy released in the process). Bacteria prefer PhosphATE much above PhosphITE nutrition.

However, due to its higher solubility, PhosphITE is easier to absorb by micro-organisms and plant roots when applied to the soil.

PhosphITE may undergo slow chemical oxidation (as compared to biological oxidation). In comparison to PhosphATE, PhosphITE is less attached and fixed on soil minerals. This may facilitate the movement of “in-row” or drip applied phosphorus toward the roots.

In principle, the use of fertilizers based on PhosphITE looks promising, but not enough research has been performed on the issue. The enhances mobility of PhosphITE salts of Calcium (Ca), Magnesium (Mg) and Potassium (K).

Controversial results in the investigation of Phosphite as plant nutrients.
In 1975 more than 750 hectares of maize in Michigan showed toxicity symptoms after the application of a fluid 9-18-9 fertilizer prepared with PhosphITE. The fertilizer was applied in the row, in contact with the seed or as a foliar spray at a rate of 40 Lt per hectare (Lucas, 1979). However there were no toxic symptoms when the same material was applied in 1976.

New interest in the issue aroused when Lovatt et al (1990) from the University of California at Davis identified P deficiency in some citrus orchards that affected their nitrogen metabolism. An application of Potassium PhosphITE restored that metabolism and plant growth to normal. Furthermore, the application of PhosphITE increased flowering, yield, fruit size, the concentration of soluble solids and of anthocyanins in avocado.

Lovall also proved that fruit set of avocado was improved after spraying Potassium PhosphITE. This research led to the first commercialization of a fertilizer based on PhosphITE, was duly patented and sold as a registered foliar fertilizer on a wide range of crops.

Not so long ago, in 2003, a comparison between Ammonium-PhosphITE (11-35-0) and the popular liquid fertilizer Ammonium-PolyPhosphATE (11-34-0) applied to cotton at a rate of ~100 Lt per hectare; 5 cm to the side and 5 cm below the seed row, at planting, both with and without irrigation in South Georgia (Glen Harris at Tifton, Un of Georgia) was performed. With Ammonium-PhosphITE the plants were smaller at the 4-true-leave stage, but there were no differences in the concentration of P or the yield between the treatments.

In 2004, farmers in South-East Alabama, South Georgia and North Florida identified toxic symptoms in Maize treated with a basic fertilizer of Ammonium-PhosphITE (11-35-0) as an alternative to Ammonium-Poly-Phosphate. Lovall & Mikkelsen warn that “PhosphITE is most effective when the rate and the application are properly timed to match the needs of the crop” and they emphasize that PhosphITE, being chemically different from phosphATE, their differences must be taken into consideration to avoid plant toxicity.

Meanwhile both suppliers and farmers must be aware of the existence of PhosphITE fertilizers; however both their production and correct use must rely on expert advisors, since the risk of danger due to phyto-toxicity is always present, while their correct formulation and application may optimize crop productivity – mainly crops with high returns.