Manganese Gat is a source of crop available chelated manganese. A fertilizer that provides manganese to agricultural crops that suffer from Mn-deficiency. The proper dosage depends upon the soil’s characteristics and the level of Mn-deficiency. In order to maximize the efficiency of Manganese Gat, weekly split applications are recommended with no less than 5 Lt Manganese Gat/Ha /week.

Packaging
Manganese Gat is supplied in 10 Lt cans, in jumbo containers up to 1,000 litres; in bulk or added to a liquid fertilizer. 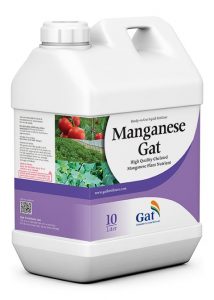