Fertigating with Ferrogat
When fertilizing with Ferrogat via the irrigation system, it is advisable to inject it towards the end of the irrigation application, specifically during the last third of the irrigation turn, so that it remains in the bulk area of the active roots. The ability of the crop to absorb iron depends on the presence of a high concentration of available iron in the vicinity of its roots. Therefore it is recommended to apply the recommended amount of Ferrogat in a short period of time and at high concentration, rather than applying it in diluted form during the entire irrigation.

It is also recommended to split the yearly recommended amount of Ferrogat into a limited number of fairly large doses. For example, if an annual dose of 100 Lt/ha is required, it is preferable to apply 4 doses of 25 Lt/ha, rather than 10 doses of 1 litre each.

It is more efficient and convenient to continuously provide iron with Ferrogat, rather than wait for iron deficiency symptoms to develop. Preventive fertilization avoids damage to the plants and the reduction of yields.

Recommendations for the application of Ferrogat

Artificial or detached growing media
According to crop type, maintain a constant concentration of 1 – 1.5 ppm iron in the irrigation water; 0.16 – 0.25 litres Ferrogat /m³ of irrigation water, or as weekly applications.

Advantages of Ferrogat
Ferrogat is a mixture of two iron chelates:

70% of the iron is in the form of Fe-EDDHMA, one of the most stable iron chelates available. This chelate remains stable over a very wide range of pH values (including above pH = 10), and remains available in soils with a high content of line (CaCO3) for a long periods of time.

The remaining 30% of iron is in the form of Fe-EDTA, which is relatively unstable at pH values above 7 and remains available to the plant for approximately one week.

Packaging
Ferrogat is a ready-to-use liquid preparation, requiring no further handling. The iron in Ferrogat is completely and immediately available to the plant.

Ferrogat is supplied in 10 litres cans, jumbo containers of up to 1,000 litres, in bulk or added to a liquid fertilizer containing macro- elements (N,P,K). 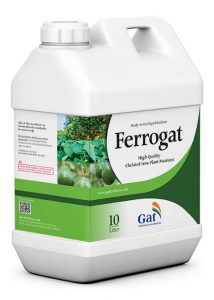