Introduction
Zinc is one of the micro-elements whose deficiency prevails in Israeli citrus orchards. Zinc deficiency may affect yield by inducing shedding of flowers, leaves and fruit, as well as lowering their quality (9). Similar to the deficiency of other micro-nutrients, Zinc deficiency is enhanced by high soil pH, reducing its absorption by the plant’s roots. Zinc availability is lower in basic soils where it precipitates as a salt of low solubility, is adsorbed by Calcium Carbonate (CaCO3), and fixated on silicates on the surface of clay particles (1,2). The application of Zinc chelates to the soil prevents its precipitation and fixation, increases its concentration in the soil solution, enhances its mobility, thus increasing its availability to the plant’s roots.

Israeli citrus growers routinely apply zinc as a foliar spray but the application of chelates through the irrigation system (fertigation) is not widespread, even if earlier experiments demonstrated its positive effects (10). Fertigation with zinc chelates was more effective in correcting its deficiency when compared with foliar applications (11). It is generally accepted that foliar applications of zinc contributes mainly to vegetative growth and little to the development of the tree’s roots, since its transport from leaves to roots is limited, so that it cannot correct zinc deficiency in the roots (3,4). This, in contrast to the application of zinc chelate (Zn-EDTA) to the soil via the irrigation system, where zinc is transported efficiently to the leaves while improving the absorption of iron (Fe) by the crop.

This result points to the possibility that iron may replace zinc in the chelate and facilitate its absorption (5). The application of zinc chelates through the irrigation system may increase the concentration of zinc in leaves and was found to more efficient than non-chelated zinc products.

The aim of the present experiment was to investigate the efficiency of fertigation of a zinc-chelate to remediate an extreme zinc deficiency in cv. Pomelit and cv. Or citrus orchards with the aim of increasing fruit yield and quality.

Materials and methods
The experiment was performed in two separate plots planted at 4 by 6 m in 1995 (one with cv Pomelit on Volka rootstock and one with cv Or regrafted on cv. Mineola on Volka in 2003) both in the Beit-Shean Regional Citrus Orchard at the site where the Bezeq Wadi meets Highway 90, on a brown, calcareous, alluvial soil mixed with local marl.

Each of the two experiments was designed in blocks, with 5 replicates, each comprising the full length of a row receiving the zinc-chelate treatment, alternating with a control row receiving no zinc chelate. The remaining management of the orchard was uniform for all the trees.

Leaf were sampled in the month of September of each year and analyzed for zinc and other nutrients at the Laboratory of the Field Service at Neweh Yaar.

The cv. Pomelit was harvested in October of each year. The yield and number of fruits of each of four trees per replicate (both control and treated) were weighted and counted. In 2009 the fruit of two picking bags (chosen at random from each tree) was classified by diameter.

The cv. Or was harvested in January each year from two trees per replicate, registering both yield per tree and fruit number. Fruit size was sampled as above.

Findings and discussion
Zinc concentration in leaves
The results of leaf analysis for zinc at the end of the in 2008 for both cultivars showed that the concentration was below the sufficiency threshold (below 15 ppm). There was no difference between Zn concentration in the control and that in the treated trees (Fig 1) except for one outstanding replicate with 17 ppm Zn among the cv. Pomelit control rows.

The low level of leaf Zn may be due to the exceptionally high fruit yields of that year. The leaf analyses performed in 2009 and 2010, after two and three years of application of the zinc chelate, showed a significant difference between the treated (higher) and the control (lower) Zn concentration in the leaf samples of both cultivars. This was strongly apparent in the leaves of control trees of cv. Or, in which the concentration of zinc increased from 7.5 in 2008 to 12.5 ppm in 2010, in contrast to the leaves of treated trees in which its concentration increased from 7 to 21 ppm. The leaves of the control rows of cv. Pomelit showed a moderate increase from 10 to 16.3 ppm in contrast to the treated ones (from 7.1 to 19.4). 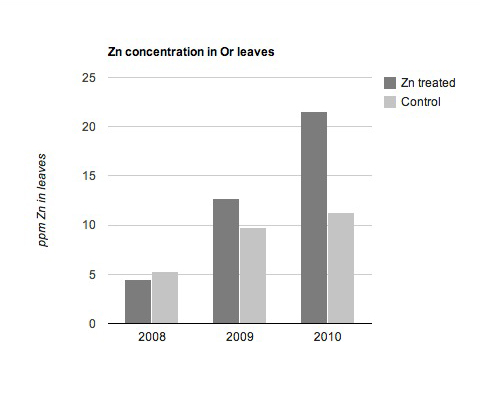 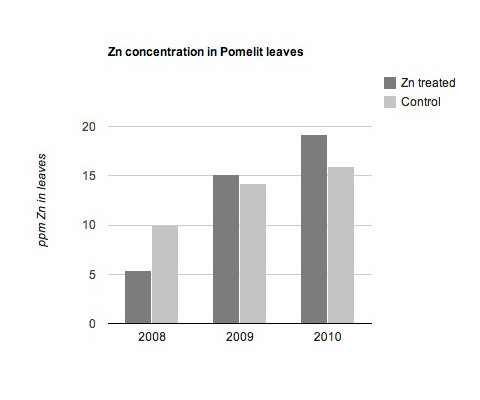 The concentration of other nutrients analyzed in the same sets of leaves did not show any significant difference in both years (Tables 1 and 2), except for an increase in the concentration of Manganese (Mn) in the zinc treated blocks of both cultivars at the end of third year of the experiment.

This may indicate that the root system of the trees, after three years of zinc applications, developed better so that they were more able to feed on soil manganese.

It is worthwhile to mention that the concentration of leaf potassium fell considerably in those years with high yields (2010 for cv. Or and 2008 and 2010 for cv. Pomelit).

There was no significant difference in the weight and number of fruits per tree of cv. Pomelit between the control and the treated trees sampled in all three years. The yield of the highly alternate bearing cultivar Or, was the highest in 2008 with 152 Kg/tree and 916 fruits/tree, while the yield in 2009 was low, with 67 Kg/tree and 458 fruit/tree, while 2010 was average in yield with 117 Kg/tree and 757 fruit/tree. In coantrast to cv. Pomelit, the yield difference from year to year was significant, emphasizing its alternate bearing behavior. The yield was drastically reduced in 2009; (100 * (1 – 67 / 152) = 56%) by 56% in comparison to 2008 (Fig. 3). Its yield is also strongly affected by other orchard management practices, not related to fertilization.

Single factor ANOVA statistical analysis of the 2009 yield of cv. Or trees treated with the zinc chelate was significantly higher at (P=0.0005) (with 73 Kg/tree) in comparison to 61 Kg/tree in the control. The number of fruits per treated tree (513) was also statistically significantly different from those of the control (402). There was no statistical significant difference for the rest of yield data, however the yields of zinc-treated trees was higher than that of the control. It should be recalled that zinc deficit leads to flower and fruit shedding. Therefore in years when the number of fruits per tree is relatively low, it is important to keep zinc concentration within the sufficiency level is import. 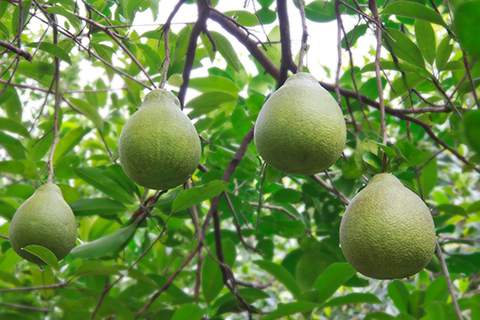 It is apparent that there is no difference in the average fruit diameter between years. Thus even if the number of fruit/tree was higher in the zinc-chelate treated trees, fruit size was not affected. 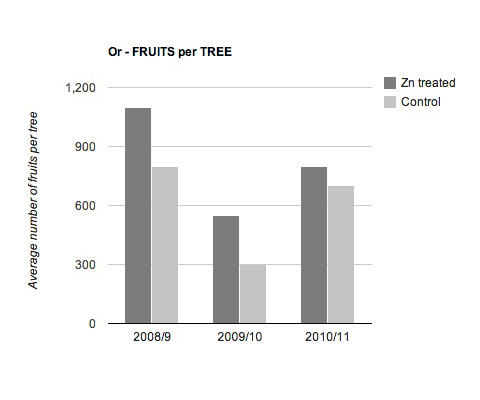 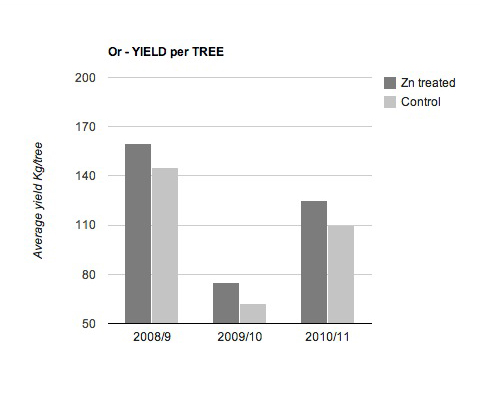 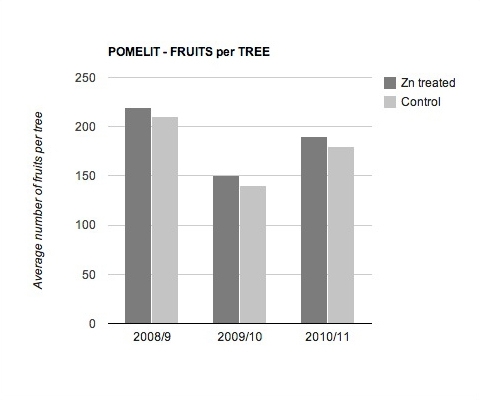 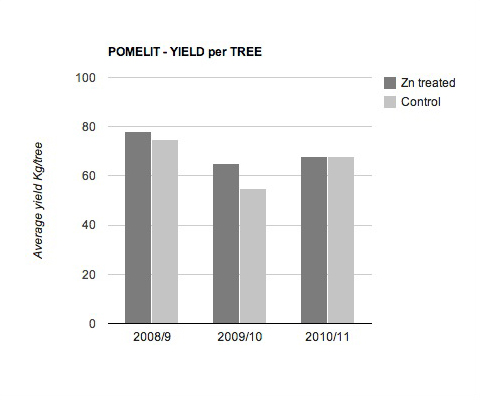 Treated cv. Or trees yielded some 20% more fruits than the control; also the yield of the treated trees was 10% higher.